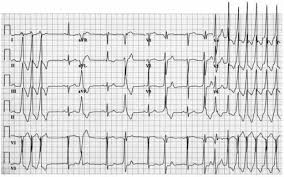 CPVT is an abnormal heart rhythm (arrhythmia) caused by the body’s “fight or flight” response that happens in times of stress or physical exercise/exertion.  At these times, the body releases hormones called “catecholamines”, more commonly known as adrenaline, noradrenaline, and dopamine.

In most patients with CPVT, the release of catecholamines, such as with physical exertion during competitive sports, causes an abnormal release of calcium by the heart’s cells and can lead to an irregular fast rhythm in the ventricles (bottom chambers of the heart), called polymorphic ventricular tachycardia. This rhythm can result in low blood flow out to the body, including to the heart tissue itself, which can then lead to syncope (fainting) or even sudden death.  Patients with CPVT can also have irregular heart rhythms in the atria (the top chambers of the heart).  The resting electrocardiogram (ECG) in a person with CPVT is often normal. Signs of this disease are usually only visible with stress or physical activity when there is an increase in catecholamines.

In certain patients, there are no symptoms.

Exercise stress testing may help confirm a CPVT diagnosis, but a normal exercise test does not mean that a child does not have CPVT.

Genetic testing and genetic counseling can be valuable tools when evaluating patients and their family members for channelopathies.

Treatment of CPVT focuses on preventing and treating ventricular arrhythmias.  Your cardiologist may prescribe medications (beta blocker) which lessen the effect of catecholamines in our bodies, or which affect the ion channels of the heart cells, or other types of medications used to treat abnormal heart rhythms. Implantation of an implantable cardioverter defibrillator (ICD or defibrillator) may be indicated for certain patients, especially those who have had a life-threatening arrhythmia (such as ventricular tachycardia or ventricular fibrillation).  Depending on the diagnosis, and the severity and frequency of a patient’s episodes, a surgery to cut the nerve that makes the heart respond to catecholamines may be offered (denervation procedure). This surgery may take place before or after ICD implantation. Even after ICD implantation, patients may be required to continue with their medications and activity restrictions.

Patients with CPVT may be restricted from competitive sports, and some may require even stricter limitations. Even if there are some restrictions, it will be important to discuss the activities that are safe and appropriate for the patient, and to focus on what CAN be done and how to stay safe when participating in activities.